Deprecated: Function create_function() is deprecated in /home/bisschool/public_html/uat/wp-content/plugins/page-scroll-to-id/malihu-pagescroll2id.php on line 376 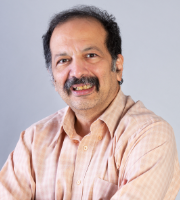 Dr. Vakil joined as Principal in August 2016. Speaking of the vision of the BIS founders and trustees, and school heads through Mrs. Seervai, he paraphrases Newton, “If we see further today it is because we stand on the shoulders of giants.” He is eager to sustain BIS’s unique ethos amid the pressures of commodification in Indian education, while maintaining BIS’s openness to change. “This openness was again evident in BIS migrating to international curriculums earlier in this decade, and excelling in their delivery,” he adds.

Dr. Vakil joins BIS after 18 years as an early pioneer of the IBDP in India, Mahindra UWC, where he headed Academics since 2000, was Deputy Head for over a decade, and where his family is still based. He taught IB History continuously from 1998 and 2016. He began teaching TOK in 2010, and continues to teach it at BIS. He had taught in the mid-‘90s at both Wesleyan University and at Yale, where he did his masters and doctorate in 19th century economic and cultural history.

His work with the IBO has included school authorizations ranging from South Bombay to rural Malaysia, and being one of the co-founders of SAIBSA. What he is most proud of is developing a curriculum at MUWCI that was then converted by the IB, in partnership with Howard Gardner’s Harvard Project Zero, into its first interdisciplinary EE — World Studies. In Indian education, he was part of the team of educators that devised the current National Curriculum Framework, chairing the Exam Reforms Focus Group.

He tries to find time to play badminton, table tennis and Ultimate Frisbee with his family on weekends, and works on developing his patience and spatial skills by making giant jigsaws with his older son during vacations. When kids and emails allow, he follows Indian stock markets and plays bridge online.

Design and Developed by PI TECHNIQUES